Don’t Assume Your Taxes Will Be Lower in Retirement 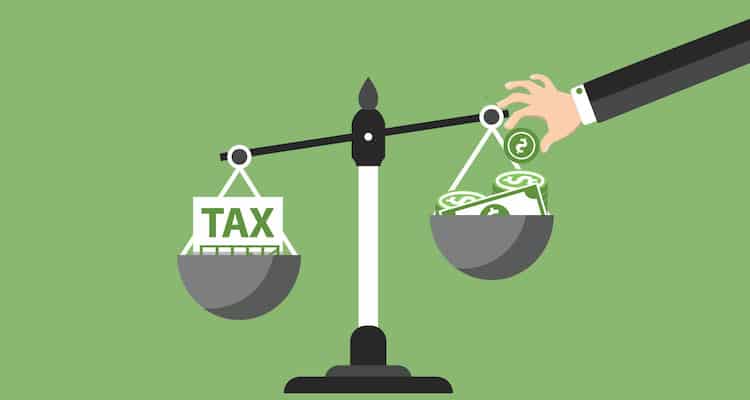 Franklin D. Roosevelt once said, “Taxes are paid in the sweat of every man who labors.” But, I have a not-so-well-kept-secret. You’re also going to have to pay taxes in retirement.

Some of you may be floored upon hearing this. I mean you’re no longer drawing a salary. So, that means that no more payroll and FICA taxes, right?

Don’t Assume Your Taxes Will Be Lower in Retirement

There’s some truth to that. But, even in retirement, you’ll be earning an income. Most likely, this will be in the form of distributions from retirement accounts and Social Security benefits. As such, you still have to pay taxes in your post-work life.

Before you frantically call your financial advisor or whoever is managing your retirement accounts, it’s not all bad news. Despite still having to worry about taxes as a retiree, they probably won’t be as hefty as you may assume.

Why your taxes in retirement may be less than you think.

For starters, not all of your retirement income is taxable.

“When you’re working, the bulk of your income is from your job and is fully taxable (after deductions and exemptions) at ordinary income tax rates,” explains Erik Carter, Senior Resident Financial Planner at Financial Finesse. “When you’re retired, this is only true for pension income, withdrawals from taxable retirement accounts, and any rental, business, and wage income you have.”

“Social Security is taxed at ordinary income rates but only part of it is taxable,” Carter adds. “Withdrawals from Roth accounts are tax-free if you’ve had the account for at least 5 years and are over age 59 1/2.” And, the principal accumulated “from savings and investments is tax-free and long term capital gains are taxed at lower rates or can even reduce your other taxes if you’re selling at a loss.”

Additionally, because your income will most likely be lower, you may actually retire in a lower tax bracket. However, at Charles Schwab remind you that “if your taxable income remains the same in retirement as when you were working, higher rates in the future could boost your tax liability.”

But, what truly matters is your effective tax rate. But, what exactly is this?

How to calculate your effective tax rate.

“Under tax reform, five of seven marginal tax rates were lowered by 1% to 4%,” clarifies Lisa Greene-Lewis, a certified public accountant and TurboTax tax expert. Currently, these rates are 10%, 12%, 22%, 24%, 32%, 35% and 37%. “When it comes to calculating how much tax you have to pay, there is a common misconception that what you are required to pay is based on the marginal tax rate that coincides with your tax bracket and your entire income.”

“For instance, if you are single and earn $50,000, you may be thinking the taxes you owe are calculated simply as 22% of your entire $50,000 in income since you fall into the 22% tax bracket,” adds Greene-Lewis. “However, keep in mind that your tax liability is based on your effective tax rate and not the 22% marginal tax rate.”

If you’re still confused, let’s try to clear things up.

“Because we have a progressive tax system in the U.S., not all of your income is taxed at the one marginal tax rate tied to your tax bracket,” she adds. “In a progressive tax system, your income is taxed at different rates at different income thresholds, so the effective tax rate gives you a more accurate picture of the taxes you’re paying since it is essentially an average of tax rates rather than your entire income tied to one tax rate.”

How do you calculate your effective tax rate?

The first step is to know what your taxable income is. FYI, this “is your income after the standard deduction ($12,400 single, $18,650 head of household or $24,800 married filing jointly) or itemized tax deductions, above-the-line adjustments to income, and the 20% qualified business income deduction (if you are self-employed) are taken into account.”

“Another way to figure out your effective rate? Simply “take the total tax and divide it by your taxable income.”

What if you sold long-term investments and had a gain? Well, long-term capital gains will not be taxed at the same rates. In fact, you’ll “be taxed at lower rates (0%, 15% or 20%) based on your income. If you sold investments that you held for less than a year and had a gain, then your short-term capital gains will be taxed as ordinary income,” Greene-Lewis states.

Yeah, this is a lot to absorb. So, before getting too overwhelmed, speak with a financial advisor. Or, you can use this calculator.

Excellent question. For most people, there are six types of income you’ll earn throughout retirement. So, let’s take a look at how each will influence your taxes.

If Social Security benefits are your sole source of income, then I’ve got some good news for you! You won’t have to pay any taxes.

Unfortunately, this isn’t the case for a majority of retirees. Circling back to FDR who passed the Social Security Act, this was never intended to be the primary source of retirement income. Besides, Social Security benefits are modest.

With that in mind, you probably have other income streams. That means you could have up to 85% of these benefits taxed. It depends on how much you’re pulling in from your other sources of combined income.

To help you figure this out, the IRS does have a handy tax worksheet.

Do you have tax-deferred retirement accounts? I’m talking about traditional IRAs or 401(k) plans, 403(b) plans, and 457 plans. If so, then expect to be taxed.

Generally, the amount you’ll pay in taxes depends on the total amount of income and deductions you have. Another factor is the tax bracket that you fall into for that year.

In case you weren’t aware, your tax bracket can fluctuate. If you took out more deductions last year because of medical expenses, you might not have to pay taxes on those withdrawals.

Don’t forget that when you turn 72, you’re required to take the Required Minimum Distribution (RMD).

At that time, the IRS will come a-knocking to collect this income. And, if you don’t do this, you might get hit with a 50% tax penalty on the amounts that haven’t been correctly disbursed from your 401(k) or IRA.

But, if you have a Roth IRA, you might be able to skirt RMDs. The reason is that you’ve already paid your taxes on these contributions in the same year that you made them.

Just like your 401(k) or IRA, any income that you receive will be taxed when you make a withdrawal. In case you already forget, that’s because it was tax-deferred.

That just means that the pension account was funded with pre-tax income. As a result, your annual pension income will be included on your annual tax return as taxable income. And, it will be that way for as long as you’re collecting a pension.

There is an exception though. If you funded your pension with after-tax dollars, then that portion will not be taxed.

When it comes to annuities, there are various tax rules. It boils down to if it was purchased with after-tax dollars and is within an IRA or another retirement account. As an IRA owner — you could invest in an annuity, but the taxes you owe will be determined by the tax rules for that account.

As if this weren’t confusing enough, taxes will also differ depending on if you have an immediate or fixed and variable annuity.

If you have capital gains, dividends, or investment income you’ll have to pay taxes on these. These are also reported on your 1099, so this will be sent to you each year. That’s one less thing to worry about.

Just know that if other income sources aren’t too high, you may not have to pay tax on all or a portion of your capital gains for that tax year. Also, cash flow investments, such as a matured CD of $10,000, aren’t considered taxable income. But, if you earned any interest, you need to report that.

Gains after selling your home.

How to pay fewer taxes in retirement.

As a general rule of thumb, don’t automatically assume that your taxes will be lower in retirement. Some of us might be even be faced with higher taxes depending on your total amount of income and deductions. And, you can estimate that by adding up your taxable income and dividing that by your deductions and exemptions.

But, did you know, that there are other ways to minimize income tax in retirement?

It’s true, as long as you consider;

Most importantly, schedule an appointment with a financial advisor sooner than later to start planning how to lower your taxes in retirement.