I’m going to say something that’s probably not very popular; I can’t stand networking. It’s not that I’m antisocial or hate attending networking events. As long as they have a purpose, like an awesome speaker or training sessions, I’m game.

If people will be there that have great ideas and energy to share, I’m game. But attending an event just to hand out business cards and get a stack in return with the hopes of landing a new client or important connection.

Ask yourself honestly how many meaningful connections did you actually make at the last networking event? If you can truthfully say you benefited greatly, then go. If not, don’t.

Greg McKeown, author of Essentialism: The Disciplined Pursuit of Less, writes in Harvard Business Review (via Inc.) about his interview with venture capitalist and entrepreneur Rich Stromback. Stromback earned the nickname of “Mr. Davos” for being able to broker meetings between influential contacts at the World Economic Forum. Stromback said, “99 percent of networking events are a waste of time.”

Why Networking Events Can be a Waste of Time

For many people, networking events are ineffective because:

However, as Alex Turnbull the CEO & Founder of Groove further explains, networking events aren’t really the best places to network in the first place.

“Yes, networking events bring people together. But then what happens?,” asks Turnbull.

“The people that everyone wants to connect with get bombarded with noise from all directions, and everyone else is slowly picked off by those who are only there to pitch their products or services to anyone who will listen.”

“I’ve often found myself leaving startup mixers with a pile of business cards printed with names that I couldn’t put a face to if I tried.”

Going back to Stromback, he believes that first impressions are overrated.”Everyone gets this wrong. They try to look right and sound right and end up being completely forgettable.

“I’m having a ball just being myself. I don’t wear suits or anything like that. I do not care about first impressions. I’d almost rather make a bad first impression and let people discover me over time than go for an immediate positive response,” he says.

“Curiously, research I read years ago suggests that you build a stronger bond over time with someone who doesn’t like you immediately compared to someone who does. Everything about Jack Nicholson is wrong, but all of the wrong together makes something very cool.” 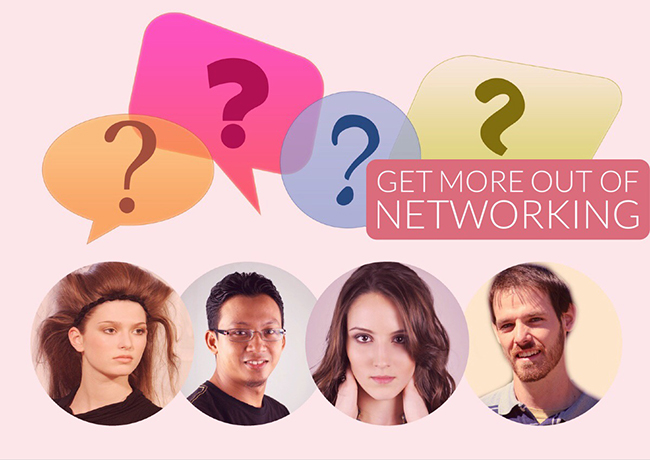 Stromback adds that the most important networking opportunities happen during less formal moments. “The opportune moments happen while dancing at one of the nightcaps or at a chateau where only a select group of people is invited. The conversations there can go on until the early morning hours.”

His final words of advice was to stop networking altogether. “Nobody wants to have a ‘networking conversation,’ especially those who are at the highest levels of business and politics.”

“They are hungry for real conversations and real relationships. It just has to be authentic, genuine, and sincere. I don’t look at people’s badges to decide if they are worth my time.”

Davos has about 3,000 influential people. He says, “I need to be selective, yet authentic–focused, yet open to possibilities. In the end, I put myself in the most target-rich area and then just go with the flow and spend time with who I enjoy.”

What You Should Do Instead

Don’t get me wrong. Connections are important. Like really important if you want to grow your business. But, there are better ways than just attending networking events.

Turnbull suggests that you start by “doing something notable that makes people want to network with you. Build something that creates value for people.

Publish something that helps your market for free. Or simply do something valuable for the people you want to connect with.”

“In my experience, that means letting your work speak of itself. I’ve been consistent, reliable, and delivered quality work. As a result, people have shared the articles that I’ve written and the connections that I’ve have, are referred me to by others. In short, make an awesome product, create top-notch content, and go above-and-beyond for your customers. If you do, a solid network of people will follow.”

After that, you should “target the influencers that you want to connect with on a personal level, away from all of the noise.”

The best way to start connecting with influencers is by sharing their content and looking for ways that you can help them. Is there an article that addresses their pain points? Can you refer them to a colleague that can help them with an upcoming social media campaign?

Just remember, don’t expect anything in return. Be genuine in your assistance.

Here are other ideas to make an impact and get connected:

1. Host your own event. This is a great option if you’re looking to strengthen the relationships with your current clients or existing clients. Have your invitation be to a product launch or an exclusive party at the hottest bar/restaurant in town.

Allowing them to bring a guest can introduce you to a new contact, but the main goal is to provide additional value to the connections you already have.

2. Double dating. Let’s say that you have four tickets to sporting event or concert. Invite a current client, connection, or strategic partner. Ask them to bring someone they think you should meet – and vice versa.

You either have a new connection or have just strengthened the relationships that you have with your existing clients.

Connect with former co-workers, or any contacts from a previous career, that you haven’t talked to in some time.

Even if you have a similar inner circle, these contacts should definitely have connections outside of that circle.

How have networking events treated you? Have they been valuable or a waste of time? How have you made them valuable?