Problems With Blockchain And Payments 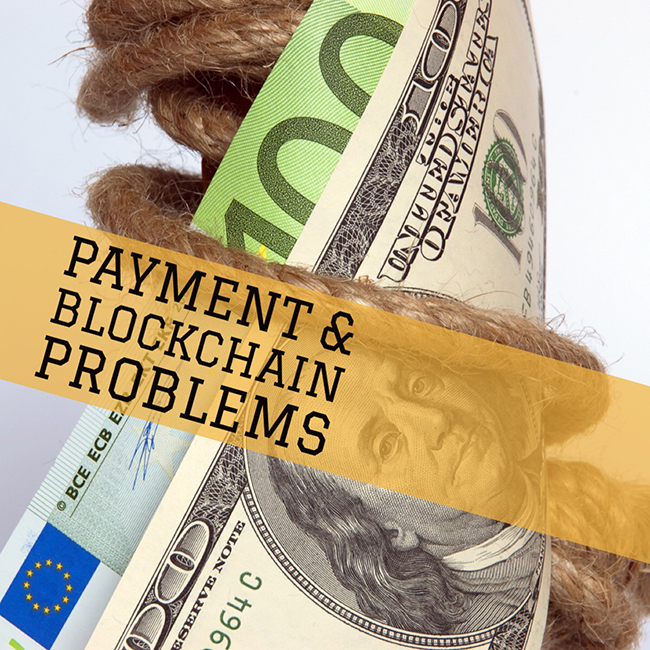 Thanks to the endless amounts of possibilities that the blockchain presents there’s little-to-no-doubt that it’s bound to become the next big thing. One area that blockchain technology will greatly impact is the payment industry. Between removing third parties, making peer-to-peer transfers more convenient, and a focus on security, it’s easy to understand why people are excited about the future surrounding blockchain and payments.

But, that doesn’t mean that the blockchain is completely free of problems involving payments. In fact, there still remains a handful of issues that need to be addressed before the blockchain can revolutionize payments.

Working With an Outdated Infrastructure

As Mike Gault, the founder and CEO of blockchain technology platform Guardtime, says in TechCrunch that the most obvious problem regarding the blockchain and payments is that, “most banks have massive infrastructure debt in financial processing systems. These systems could be 15, 20 years old.” Gault goes on to say;

“But they power transactions between the world’s major businesses and governments; disrupting them, even for a short time, could be disastrous. Trying to overhaul them altogether is a tall order, and comes with huge risk. I doubt that many people within banks want to take responsibility for that, especially when it’s entirely outside the existing business model.”

Banks also wouldn’t be the only ones having to update their infrastructure. Retailers, both online and offline, would have to update their payment systems so that they could accept and send currency like bitcoins. While a number of companies like Overstock and Expedia have accepted bitcoins, a majority of businesses still don’t accept cryptocurrency. As Therese Torris argues on Crowdfund Insider, that merchants who accept bitcoin just “allow you to spend your bitcoins at a partnering facility which converts them into dollars – exchange costs and risks are on you.”

While there is a ton of potential involving blockchain and payments, it’s going to be a tough sell for banks and anyone who receives or sends payments when working with an outdated infrastructure that doesn’t completely embrace the technology.

Even more troubling is trying to convince others to invest in updating the infrastructure when it’s currently benefiting them. As the old saying goes, if it’s not broke, don’t fix it.

Transactions via the blockchain are secure. However, they’re still susceptible to security concerns like double spending, counterfeiting, and phishing attacks. There’s also been issues when coins have disappeared.

Again, the technology behind the blockchain makes it more difficult to break into since it’s hyper-secure and has the potential to thwart a wide range of payment scams. But, until developers can make the blockchain even more secure and prove to banks, consumers, and merchants that the blockchain is more secure than traditional payment systems, this will remain one of the most common problems surrounding the blockchain and payments.

Thanks to a number of technological advances, accepting and sending blockchain payments has never been easier. In fact, there a number of apps that allow you to easily complete transactions simply by using your smartphone.

But, that doesn’t always mean that you’ll be able to easily access your funds.

While it may not be as common as with traditional banking institutions, there is still a chance that there will be an outage. As McAfee notes, this not only impacts your ability to access your funds, “they have immediate consequences as peer discovery from ‘good’ to ‘bad’ nodes depends fundamentally on the availability of good nodes.”

However, the most cumbersome aspect in accepting bitcoins is that it can be a minor headache to convert the funds into your preferred currency. While there are more than enough exchanges that will do this for you, for a fee of course, it may not be as convenient for some people to access the funds as they normally could with options like PayPal or a direct deposit into their current checking account. This is an area that should be resolved, but for now, accepting digital cash may not be that easy for everyone.

Finally, while the blockchain prides itself on the ability to access fund instantly, this isn’t always the case. In some cases, you may have to wait anywhere from 10 minutes to an hour for a transaction to go through depending on how many transactions are being processed. That’s not the end of the world, but if more people are using the blockchain, it may take longer for you to access your funds.

Bitcoin, and the Blockchain, Are Unsustainable

Speaking of the growing number of blockchain users, this will present another hurdle in in the payment industry; energy consumption. As Christopher Malmo explains on Motherboard,

“Let’s take this Bitcoin mine in China as an example of the scale of today’s operations. It is supposedly running at 6 PH (quadrillion hashes) per second, according to a Chinese Bitcoin company CEO posting in a Bitcoin forum, with the aim to scale up to 12 PH per second. That would give it about 3.3 percent of the total power on the Bitcoin network. Because the Bitcoin network is set up to dole out around 3,600 BTC per day to miners, this mine would rake in about 118.8 BTC per day, or more than $30,000USD at the time of writing. That’s not a bad haul when your electricity costs are among the lowest in the world at 3 to 6 cents per kw/h, about a third of US prices.”

But, that’s a problem when you reside in countries where electricity costs are more expensive. And, if demand continues to grow, this mining for bitcoins is costly to produce both financially and environmentally.

As Malmo concludes, “Bitcoin’s power usage per transaction isn’t remotely sustainable as a wholesale replacement for the conventional financial system. In the future, Bitcoin could massively gain popularity, pile on millions more transactions, and still be unsustainable due to the arms race between miners.”

Finally, there are still questions on the legality of the blockchain and how it can be taxed. In most countries around the world, digital currency isn’t illegal, it’s just not considered legal tender. As Investopedia explains, the U.S. Department of Treasury defines “bitcoin not as currency, but as a money services business (MSB). This places it under the Bank Secrecy Act which requires exchanges and payment processors to adhere to certain responsibilities like reporting, registration, and record keeping. In addition, bitcoin is categorized as property for taxation purposes by the Internal Revenue Service (IRS).”

This can present a headache when it’s time to file your taxes. For example, if you were a merchant who accepts bitcoins and uses the digital currency to purchase other goods or services from others, how should they be taxed? Are they classified as an asset, digital good, or voucher?

Additionally, there’s also the determining how much you owe you on your taxes. This is determined if you experienced any gains or losses on the value of your digital currency. This can become burdensome when the price of blockchain coins can fluctuate so frequently and rapidly.