How To Be In Charge Without Being An Asshole 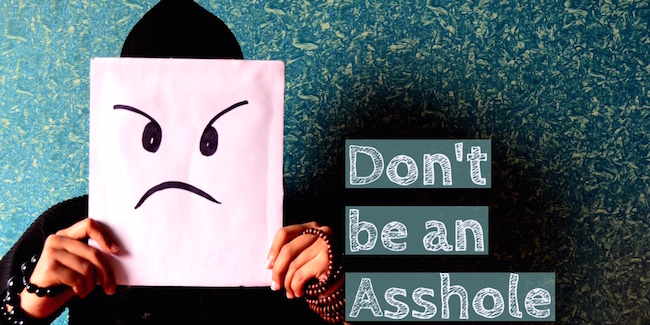 As someone in a leadership position I am often asked the question, “how I can be in charge, without coming across as an asshole.” So, I’m owning the inappropriate business-place word because this has become my number one direct quote question.

It’s taken some trial and error, but here are the six ways that I’ve been able to answer this question.

Set expectations, set consequences, and then be fair.

When it comes to the fundamentals of management, one of the most important components is setting expectations. Oh yes, and remember to tell your employees these expectations, in writing, so that they – or you – cannot change the rules mid-stream. The reason? It ensures that everyone is one the same page and is accountable for their own work. And, even though some people may call you an asshole behind your back, setting clear expectations, along with establishing consequences and being fair, will ultimately prove that you are definitely the opposite.

Here’s how you can get started on setting expectations;

Besides setting expectations, you also need to clearly layout the consequences for inappropriate behavior for when a team member, say, doesn’t meet a deadline. When determining these consequences, it’s imperative that you’re fair. It wouldn’t make sense to layoff an employee because they missed a deadline by one day, but only give a warning to the next employee who has made offensive comments to female coworkers.

Think about someone in your life who constantly demanded respect. Did you actually give them that respect? Or, did you merely end up resenting them?

Great leaders earn the respect of their team members. They do so by not forcing their opinions on others and by listening to what their employees have to say. A great leader also genuinely cares about their team members. And, if they don’t really feel a genuine care, they find a way to change their own minds about that employee. The leader stays true to their values, and shares their own and employees opinions or feedback when appropriate.

“If you’re not direct, people won’t know what you truly think about them and their work, and they will never be able to improve,” says Taso Du Val, CEO and founder of Toptal.

“If you don’t know the precise direction your company is headed, no matter how much you’ve communicated to your employees and leadership team regarding their individual performance, they will flounder when it comes to making decisions and taking actions. Once those basic principles are in place, deadlines, regular product plans, performance reviews, structure and processes can easily be put into place.”

Dr. Daniel Goleman explains that, “There are two specific kinds of empathy; one is cognitive empathy, understanding how others think about the world. Once you know their mental models you can put what you have to say in terms that will make most sense to them.”

“The second kind, emotional empathy, means you can sense immediately how another person feels. This means you can fine-tune what you say so it has a positive impact. These two kinds of empathy are essential for rapport and chemistry with another person. We use them in all our relationships.”

As a leader, you can use empathy on a daily basis by taking into consideration how employees feel, which can guide you when interacting with them. For example, if you had to layoff an employee, you probably wouldn’t get all Donald Trump on them and exclaim (scream?) “You’re fired,” right out in the middle of everyone in the office. You would consider when, where, and how to break the news, professionally, to the employee.

Don’t worry about being liked.

I’m going to be honest here. Your employees aren’t your friends. That doesn’t mean that you can’t get along or even enjoy each other’s company at functions outside of the office. I’m just saying that being concerned about how people perceive you in the office isn’t a priority.

Instead, you should focus on how you bring value to the business and your employees. Even if your team aren’t your BFFs, they will still respect and rely on you – just like it did with Steve Jobs.

When I talk about picking your battles, I mean understanding the difference between how you prefer things to be done and something that was done incorrectly.

For example, you run an eCommerce site that uses WordPress for its blog. Because of this, writers are expected to upload and submit their articles onto your WP dashboard. It wouldn’t make sense for them to use Joomla. If they did, then this would be an example of where, clearly something they did was wrong.

If they uploaded the article onto WordPress (as directed) and included a featured image that was the proper size (as directed), but didn’t center align the image (which was not directed, it’s just your preference), and you scold them for the error, then you’re an asshole.

Even if they made a mistake, they can’t get offended if you’re stern with them. However, if you give them a hard time because they didn’t adhere to your preferences, then you’re at fault.