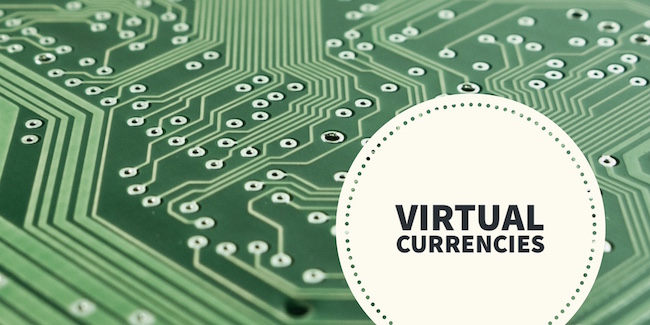 Do you use cash for any part of your regular budgeting or spending plan? It seems not many people do these days, which has led to the question of whether or not paper money may be a thing of the past. But what can paper money be replaced with? One answer could virtual currencies.

Here’s a look at virtual currency, what it is, how it works, and a few considerations about whether or not it could be a game changer by replacing paper currency in the future.

What is Virtual Currency?

Are you an avid user of online payment methods as part of your personal finance management system? If so, you may think you are using virtual currencies, but this may not necessarily be the case.

There are a lot of different definitions as the what the definition “virtual currency” is.

For example, BitCoin Magazine’s article goes on to explain that the money stored in your bank account is technically a digital currency because your balance is simply a representation of dollars that are held elsewhere. Your bank doesn’t physically hold the exact amount of cash that each of their customers’ bank accounts possess. PayPal is another good example of a digital currency.

As our society moves further and further away from a cash-based system of transferring wealth, all currencies are becoming digital, unless you store a large pile of cash under your mattress and none if your bank account.

Finding an exact definition of virtual currency is difficult, but one of the best is presented by TechCrunch’s recent article which states, “a ‘virtual currency’ is a non-government-backed digital representation of value.”

In other words, virtual currency is a system of money created by an individual or group other than a government that is usually a digital representation of value.

Popular examples of virtual currency include things like Bitcoin, Dogecoin, and Stellar.

In their infancy, Bitcoin and other virtual currency examples were seen as only a way to pay for online transactions, but these days they can even be used a form of payment in some physical stores. Although they may sound just like PayPal from that perspective, that is not exactly the case.

Once you set up an account and get a “wallet” from Bitcoin, Dogecoin, or another virtual currency, you have to acquire currency by accepting them as payment for goods and services, buying them from a friend, etc. Dogecoin is a little bit unique from Bitcoin as you can “mine” them, but it requires quite a bit of technical knowledge to gain coins this way.

According to their website, an interesting fact to know about Bitcoin vs. digital currencies that hold government-backed currency (like PayPal) is that the price of Bitcoin is volatile because of “its young economy, novel nature, and sometimes illiquid markets.” Therefore, Bitcoin does not recommend that you keep your savings in your Bitcoin wallet.

Finally, Bitcoin is not an official, government-backed currency, but most places still require you to pay income, sales, payroll, and capital gains taxes on your bitcoins and other virtual currencies because they do hold a value.

The Impact and Future of Virtual Currency

An article in Forbes revealed that bitcoins can only be created by “mining”, which is done by solving mathematical equations of enormous proportions. But even then, the supply of Bitcoin is capped so not even the inventor of Bitcoin can create an unlimited supply.

Due to its non-government backing, Bitcoin initially became popular with libertarians who tend to not trust government entities and currencies. A currency not controlled by government regulation may seem appealing at first, but the volatility of the market makes it less attractive to some users.

At this point, it seems highly unlikely that virtual currencies like Bitcoin, Dodgcoin, etc. will replace paper money supplied by national governments, partly because of the inability to store money in the currencies for a long period of time without risk in the volatile markets. However, virtual currencies will likely continue to be used as a way to exchange money due to their low cost and instantaneous exchanges of value with no “float” between receiving money and the ability to spend it.

It has also been suggested by TechCrunch that virtual currencies could have the ability to create new, more functional financial products in the future to provide additional services to current customers and to attract new customers to use their currency systems.

Even though it seems unlikely that virtual currencies will take over and replace national, government-backed currencies anytime soon, it’s clear that the world is becoming more digital and virtual all the time. A cash-based system seems to have gone by the way-side as the majority of “cash” in the banks have no actual money to back it up at all.