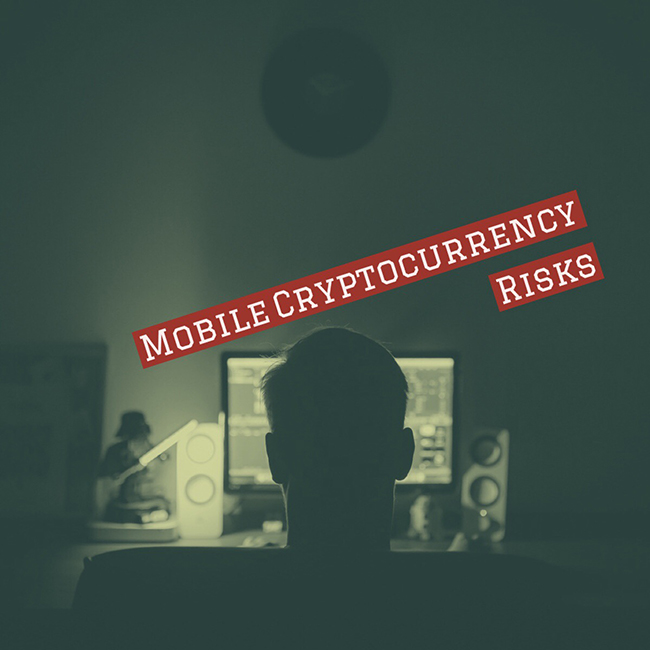 If you’ve been keep up on the latest payment trends, you’ve probably noticed that there’s been a lot of talk surrounding mobile and cryptocurrency technologies like bitcoin and the blockchain. The reason? Both are convenient, secure, and offer low-cost transaction fees. While those advantages of made mobile cryptocurrency a major factor in the future of the payments industry, there remains a number of risks involved, such as…

One of the biggest advantages that cryptocurrency has over a majority of other payment systems is that it’s secure. This doesn’t mean hackers don’t have access. While this is an extremely difficult process, multiple agencies, such as the Consumer Finance Protection Bureau (CFPB) claimed that hacking is still prevalent. The CFPB stated, “Virtual currencies are targets for highly sophisticated hackers, who have been able to breach advanced security systems”. The EBA even classifies losing virtual currency units through eWallet theft or hacking has a high threat.

In fact, the bitcoin processor BitPay was hacked on three separate occasions in 2014 alone. 5,000 stolen bitcoins were the result. While this was completely due to human error, there have been other instances, such as hackers stealing $9,000 per day of Bitcoin, Dogecoin, and Worldcoin. Hackers will, and can, breach the established cryptocurrency security features.

Cryptocurrency comes with the risk of scams. This is mainly because frustrators are taking advantage of the hype and misunderstandings involving cryptocurrency. For example, there have been a number of ponzi-like scams involving digital currencies. This includes companies like BTC-Arbs, Bitcoin Trader. It likely includes companies that launched pre-orders for miners, but never produced.

Let’s say someone steals your credit card or identity. You can ultimately prove that you didn’t make those purchases or validate who you say you. Your protection makes this possible; even though it’s headache and lengthy process. That’s not the same case with cryptocurrency. This is described perfectly in Coin Pursuit;

“Digital currency coins are encrypted to keep them secure—but there’s a potential drawback there. This coding identifies the currency itself, but not its owner. Whoever holds the coin’s encryption code becomes its owner, and there’s nothing in the coin’s coding that says it belongs specifically to you—or to anyone else. This built-in anonymity feature means when a coin is stolen, it’s gone—and you have little to no recourse in getting it back.”

Digital coin prices tend to fluctuate due to lack of regulation by one institution. In fact, the price can change daily depending on current events that are affecting the world of electronic cash, such as demand for the limited amount of coins that are available. Consequently, the EBA listed “User is not able to convert VCs into fiat currency” as a high threat.

Some won’t accept digital payments, as they don’t believe recording of transactions in the public ledger is enough transparency.  Lester Joseph, manager of Wells Fargo’s global financial crimes intelligence group said, “We determined that at this point, we would not be in a position to bank any Bitcoin businesses or Bitcoin exchangers because there’s a certain lack of transparency in Bitcoin currency as far as determining who the payments are coming from and where they’re going to.” He added, “Without being able to identify parties on either end of the transactions, we’re not able to do effective sanctions or [anti-money laundering] screening.”

Because of the anonymity that cryptocurrency provides, there’s also the very real possibilities of criminals using VC’s to launder money, extort, and make illegal purchases on the black websites like the infamous Silk Road.

Finally, mobile cryptocurrency is still relatively new. As a result, growing pains will naturally come up. These includes strengthening its security and knowing its limitations. Additionally, because this is a new area, there remains a lot of misconceptions surrounding the technology. Until people are well-informed on how to get the most out of cryptocurrency like the blockchain, they will continue to misuse cryptocurrencies and fall for scams perpetrated by hackers and fraudsters.