How to Stop Worrying About Competition as a Freelancer 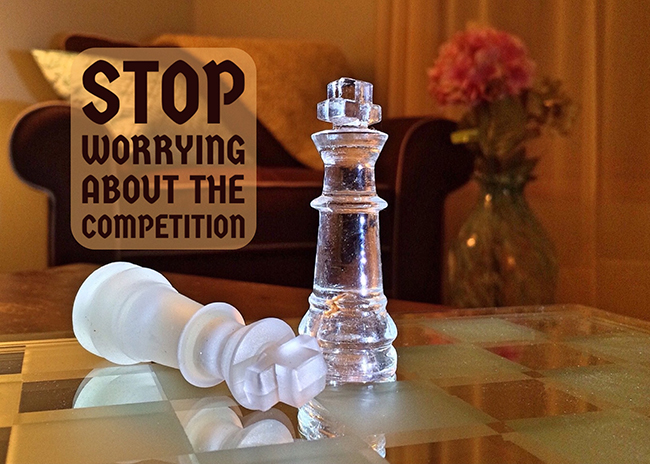 Competition as a freelancer is a common concern I hear from blog readers, podcast listeners, and coaching clients. If you’ve been following my work for any amount of time, you likely know that I’m more of a believer in collaboration than competition.

Realize that if you go the extra mile, you’ll have no problem getting work.

This is going to sound controversial, but I’m coming around to what Gary Vee says about 90% of the population: They just aren’t going to work as hard as I do.

The more I build my business, the more I’ve noticed that people’s fear either takes over or they just don’t want to put in the work it takes to start a freelance business. In fact, I’ve seen many freelancers who started around the same time that I did just give up.

This, of course, isn’t everyone. However, it is a good enough portion of the population where if you put in the work and move past your fear, you at least know you’re going to get paid.

No one has your same story.

Do you want to know what separates freelancers from one another? Their stories. This is especially true for writers who can easy set themselves apart from everyone else by crafting their own unique voice and angle.

For example, there are a lot of writers in the finance niche. However, we all have different stories. Some writers have experience with student loans while others don’t. Some of us have experience with unemployment while others don’t. Some of us cater to millennials and others cater to boomers. Two people could be experts in debt but have entirely different stories in relation to said debt.

We’re in a new economy.

It’s often times been stated that in the creative economy we’re living in today, we’re more about collaboration than competition. In fact, it’s been dubbed the sharing economy. I have also personally found that if I focus on collaborating with others who may traditionally be seen as my competition then we both make more money.

Being overly concerned with competition is an old paradigm that you need to let go of if you want to make it as a freelancer. Speaking from someone who’s spent quite some time in the freelancing business, the most successful freelancers are those that spend time collaborating instead of competing.

Everyone has their own journey.

In the freelance world, I like to think of competition as being similar to envy. When I find myself worrying about competition it’s usually because I’m comparing myself to someone else and am feeling envious of their success.

At this point, I find it helpful to remind myself that we all have a different journey with different lessons to learn and different people to reach. Additionally, as soon as I notice the envy creeping up, I make it a point to celebrate the success of others. At the end of the day, if they can have success then I can have it too.

Stopping your worrying about competition is a major mindset shift that many people have a difficult time doing, but it is totally worth the effort. By using these tips you can start to direct your energy to more important things.