Menu
Login
Blog » Business Tips » Are You a Freelancer or Entrepreneur? 3 Ways to Tell

Are You a Freelancer or Entrepreneur? 3 Ways to Tell 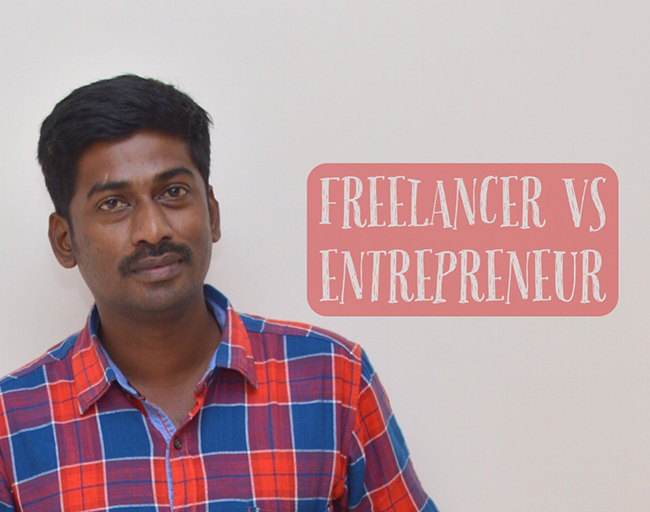 In the new world of work we live in today, we’re seeing a bit of a hybrid between freelancers and business owners. This means many people trying to answer the question, “Am I a freelancer or entrepreneur?”

Many people, like myself, begin as a freelancer and then their mindset begins to shift. They learn to build multiple streams of income, they learn to scale, they learn to implement systems and they learn to actually build a company that doesn’t require them to trade so much time for dollars.

While this is certainly a trend we’re seeing, many people still don’t understand the differences between the two. Even worse, some of them jump from freelancer to entrepreneur without even knowing it and it can lead to some major headaches.

Many people – especially in the beginning – assume that freelancing and being a business owner is synonymous. In reality, there are some major differences.

They typically have different end goals.

Seth Godin answers the “freelancer or entrepreneur?” question best in one of his articles for American Express Open Forum:

“A freelancer is someone who gets paid for her work. She charges by the hour or perhaps by the project. Freelancers write, design, consult, advise, do taxes and hang wallpaper.”

He hits the nail on the head when describing entrepreneurs too:

“Entrepreneurs use money (preferably someone else’s money) to build a business bigger than themselves. Entrepreneurs make money when they sleep. Entrepreneurs focus on growth and on scaling the systems that they build. The more, the better.”

He goes on to say how a freelancer’s goal is simply to enjoy their work and not have a boss. Meanwhile, an entrepreneur wants to eventually sell the company. Alternatively, the business owner may not want to sell but instead build a long term machine for profit.

Neither is better or worse than the other, they are just different. What he does point out is that what you are at heart will determine which one you will remain. For example, even if a freelancer begins to scale, they may never be able to sell the business because potential buyers will know they are a freelancer at heart and can’t be bought.

One works on projects, the other manages.

The blog, Finance for a Freelance Life, portrays a perfect example of what happens when freelancers move to entrepreneur without realizing it.

She went from working on her own projects, to suddenly outsourcing some of the work so she could take on more work. Then she found herself outsourcing again to help manage people. Before she knew it, she was spending more of her time managing people than actually working.

This isn’t exactly a bad thing, but it does show a major difference between freelancers and entrepreneurs. Freelancers have their hands in their projects (they almost can’t help it). Meanwhile, entrepreneurs have a role of managing others to get the work done.

Granted, in my experience this comes rather naturally when you begin to scale. First it starts off with outsourcing things like accounting and administrative tasks. At this stage you’re pretty much still a freelancer. Then you get to a stage where you are hiring sub-contractors to help with your workload.

Some freelancers still feel like they are working for someone else.

A key indicator – at least for some – when answering the “freelancer or entrepreneur” question is to answer whether or not you still feel like you’re working for someone else.

Some freelancers do feel like they are still working for someone else. This is especially true if they have long term contracts with larger companies. For example, I met a freelance graphic designer the other day who had a 40 hour a week gig with a local marketing company for six months.. He was complaining how it felt like he still had a boss.

Business owners become the boss. You have multiple client accounts, you manage other people and you keep scaling. It’s a very different mindset and it’s one that for some freelancers, like myself, comes with time.

There is no better option between freelancer or entrepreneur because, as Seth Godin pointed out, everyone is different. The key is to figure out which one you want to be so you can begin moving in that direction.