Blog » Due » 5 Signs Your Startup is Going Somewhere

5 Signs Your Startup is Going Somewhere 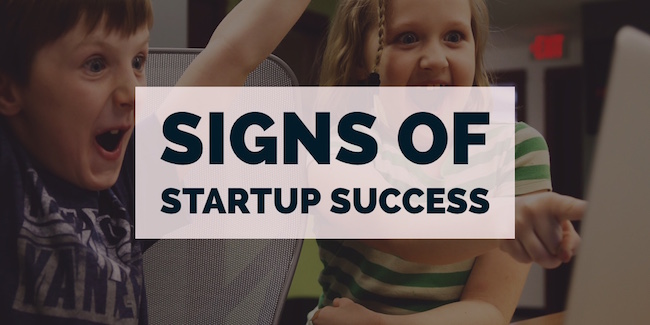 As an entrepreneur, I’ve come across my fair share of advice regarding failure. And, there’s a solid reason for this. It’s been said that 96% of businesses fail within a decade. While failure should be expected in the startup world, along with being a learning experience, all this talk about failure gets exhausting after awhile.

1. You Knew When to Launch

You hear a lot about luck when it comes to successful startups. The thing is, it’s more about timing.

IdeaLabs founder Bill Gross examined his top five performing companies, his five biggest failures, and non-IdeaLab disrupters like Airbnb and Uber. Marissa Levin writes in Inc.com that the “single greatest predictor of success or failure – for every business he evaluated – was timing.”

Airbnb, for example, “defied all conventional thinking.” Levin explains, “It had no funding, it had a sketchy business model, and the idea was definitely risky. However, the company launched during the height of the recession when people needed extra money. Its success directly reflects what the market needed, and was able to adopt, at the precise point in time of the launch.”

“Ideas are great. Awesome people are a must. Money is essential. A solid business model provides a clear path to profits,” Levin adds. “None of these will matter, however, if the market doesn’t need your product or service, and if they can’t adopt your idea precisely when you launch it.”

Consumers, not investors or tech blogs, found them first.

As Alyson Shontell states in Business Insider, “Once a startup attracts normal people, the rest is cake.”

3. You Have Money in the Bank

How many times have you heard about a company failing because they actually had positive cash flow, emergency savings, and enough cash to take them to the next level? In other words, you’ve got to be sure you’re able for your startup to grow fast and lean.

Beyond that, healthy startups are also well-funded. “Evidence of solid financial backing means someone with more skin in the game than you has done a lot of careful assessment and planning,” startup consultant Tommi Wolfe tells CBS.

Furthermore, where the money is coming from is equally important. “You should see if the company is self-funded or if there are venture capitalists behind it,” says Dan Schawbel, founder of Millennial Branding and author of “Promote Yourself: The New Rules for Career Success.” “If there are well known VC’s behind it, which they will mention on their website, then it’s usually legitimate.”

4. You’re Surrounded by a Great Team

No matter how visionary you and your idea are, it’s the people that you surround yourself with that can ultimately make or break your startup. It’s your team that will be your first, and biggest advocates, as well as the people that will convert your ideas into a reality.

What kind of employees should be involved with your startup? It should be individuals who are;

If you’ve been able to successfully recruit these type of people, then you can be certain that your startup is something that others can get behind and support.

5. Everyone is Looking at the Big Picture

When a startup is in trouble it starts to panic. This leads to everything from selling off assets, laying off employees, or beginning to consider when it’s time to pull the plug. Successful startups, however, do the opposite by continually looking forward and thinking about the big picture.

This includes envisioning the steps you need to take to accomplish goals like expanding your market or how the world will be better once you’ve reached your milestones.