The Ultimate Guide to Networking for People Who Hate Networking 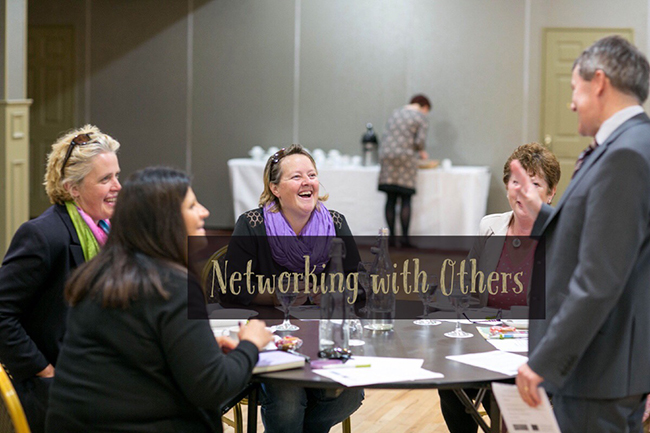 I personally love to network. I’ve never really had much of a problem going to events around town, traveling to conferences or making friends at industry events. My personal guide to networking was simple: just show up and figure it out.

Even when I had no idea what I was doing in my business I would somehow always muster up the courage to attend these events and at least pretend like I belonged there.

However, I get that not everyone is like that. Some people really do hate networking. It makes them uneasy and anxious to “work a room.”

Many people also have a terrible point of reference as to what networking actually is. We’ve all likely had the awful experience of someone trying to sell us on something we don’t need or want.

If you’re in the “I hate networking so I avoid it at all costs” camp, this guide to networking is for you. I’m compiling my best networking from years of attending events and helping tons of coaching clients get over their own fears of networking.

Take the focus off of you.

Part of the reason why people feel so uncomfortable with networking is because they feel like they will have too much attention on them.

In other words, they feel like there’s a magnifying glass pointed straight at them where people can see every single one of their flaws and insecurities.

Furthermore, no one wants to be that guy everyone hates. You know, the guy who is clearly only there to collect business cards or make money off of people.

The best way to avoid both of these scenarios is to take the attention off of yourself and put it elsewhere. For example, instead of attending one of these events while thinking “What am I going to get out of this?” go with the intention of just meeting one person. That’s it. Just one.

While I’ve previously written about how to tell whether or not a networking event is worth your time, I’ve come to realize that networking isn’t always about making more money. Often times it’s really just about meeting like minded people and having a good time. The money will come at some point as a result of this.

Think of networking like dating. Successful daters are those who are just enjoying the company of other people. They aren’t necessarily focused on the end goal of making someone their boyfriend/girlfriend.

When it comes to networking, successful networkers are those that are attending these events in an effort to meet other people. They aren’t necessarily focused on making money.

Here’s what I mean. I attend art networking events around town not because I think I’ll make money as a result, but because I consider myself a creative and like art.

With time, this turned into speaking engagements around the city because people got to know me. From those speaking gigs, I can get consulting clients, students for my upcoming signature program or simply get more speaking gigs.

As you can see, I didn’t attend these events with the intention of making money. I simply went to meet people. This allowed me to make genuine connections which then led to people thinking, “Oh, we have this event coming up that Amanda would be perfect for! She’s such a cool chick!”

Go with the intention of learning something new.

I was recently speaking with one of my mentees at my coworking space and invited her to a local networking event. She was really hesitant to go because of some of the things I’ve already mentioned in this article.

“I just started this freelancing thing and I’m afraid of telling people what I do,” she told me. The fear of not being good enough was rearing its ugly head and she didn’t like having so much attention on her.

I taught her my number one secret from my guide to networking. “Instead of going to these events worried about what people will think of your work, go to them just to learn something that can help make you better at your craft,” I said.

As soon as I said that an expression of relief washed over her face. She was able to see that sometimes networking is about going to learn something and improve your skills, not necessarily be the center of attention.

For example, I went to roundtables being hosted by a local women’s business group not because I thought I’d get clients from it (I knew that was probably not going to happen), but because I wanted to learn from women who’d been running their businesses way longer than I had.

I showed up to these monthly roundtables with the intention to learn from people I respected and, with time, I started getting asked to teach classes for them. A few of them have even turned into clients and customers. But, most of all, I’m able to consider the founder of the organization as one of my mentors.

To be honest, I still use this strategy when attending networking events. Even though I’ve been self-employed for a few years now, I always attend events with a beginner’s mind.

There’s always something new for me to learn so that I can improve my business and it just so happens that I meet cool people and am presented with opportunities at the same time.

Networking doesn’t have to be as scary or as awkward as people make it out to be. With the right intentions and some patience, you’ll soon see that networking is more about building relationships than it is about making more money. The latter is simply a result of the former.

If there’s one thing you get from this guide to networking let it be this: take the pressure off by focusing on making friends.