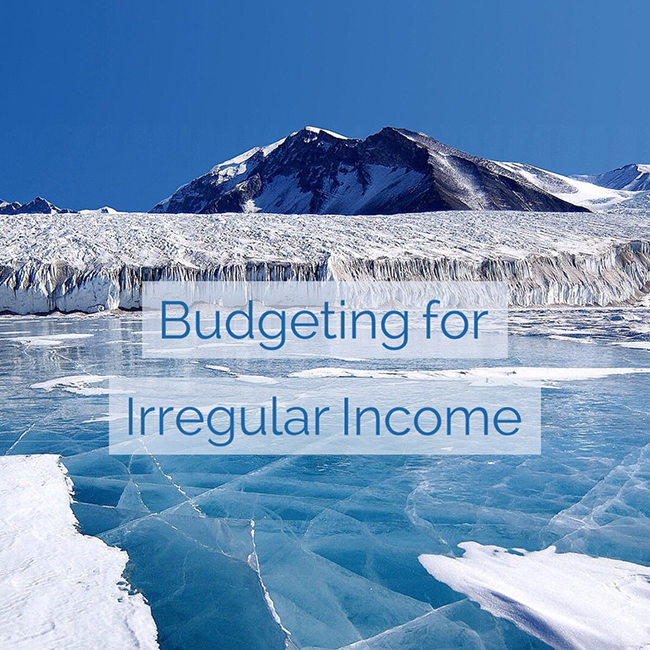 Even though I’m a personal finance blogger by trade, I really hate budgets. More specifically, I really hate super detailed line-item budgets where I track exactly how much I spent in groceries that month.

First, this stresses me out with variable income. I’ve tried every spreadsheet there is for tracking variable income and they all have me feeling like I’ve wasted my time and shot my nerves. Second, I’ve actually found that the less I stress about the tiny details, the more open I am to increasing my income, saving more money and nailing my financial goals. With that being said, here is my non-traditional way of budgeting variable income.

Just because I find that stressing over how much money I spent on groceries is not beneficial to my finances (or my sanity) doesn’t mean I’m oblivious to how much money I’m spending.

I know how much I’m roughly spending on food each month. I also know how much it roughly costs me to run my business each month. The number may not be exact each month (I have found that this is practically impossible) but I’ve got a rough estimate that helps me plan.

I also have a ball-park figure of what I’m making from month to month. I know how much money is coming in and who owes me. Admittedly, having software, a virtual assistant, and an accountant have been very helpful here.

Take your savings off the top.

The next step in the non-traditional way of budgeting variable income is to take your savings off the top.

For example, since I haven’t found my own place yet and I’m staying home for the time being to aid in the caregiving of my aging grandmother, I’m pretty much putting the equivalent of a mortage payment into index funds at the beginning of each month. I also make sure to set some money aside for emergencies and a large purchase like a trip.

This is before I pay any bills for the month. Once I’ve got that taken care of I can pay my bills and do whatever I want with the rest of the money.

I credit Paula Pant of Afford Anything for this gem of non-traditional budgeting wisdom. Because I’ve taken care of my savings first, then I simplify the process and don’t feel any guilt associated with spending some of my money.

Stop Stressing So Much.

Something strange happened to me toward the middle of 2015. I completely gave up on trying to budget variable income. Actually, a more accurate description would be that I simply surrendered because I was tired of feeling stressed all the time.

Shortly after this moment of surrender, I actually started making more money. Like, a lot more money. And it hasn’t stopped coming.

I personally don’t think this is a coincidence. As soon as I stopped focusing on minute details and worrying about not having enough, my mind was able to better focus on how to make more money. I learned that sometimes it really is easier to make more money than it is to nickel and dime every little detail of your financial life.

At the end of the day, we need to have a balance of managing money and enjoying money. I personally found that more traditional forms of budgeting variable income were causing too much stress and self-sabotage. Instead, I started to focus on feeling better first. Once I did that, my mind was clear to handle variable income.